The Capital Conference consistently features an outstanding lineup of keynote speakers that will inspire, inform and enlighten attendees. Keynote speakers are featured at both General Sessions during the conference as well as the OSBA Black Caucus Dinner and Conference Luncheons. 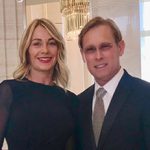 A photographer captured their first kiss for the world to see. Bart Conner, then 17 years old, kissed the cheek of Nadia Comaneci, a 14-year-old Romanian gymnast, after the two proudly held up their silver cups as champions of the 1976 America Cup at New York City’s Madison Square Garden.

Three months later, Comaneci scored seven perfect 10s at the 1976 Olympics in Montreal. The five-time gold medalist was the first gymnast to be awarded a perfect score. Conner went on to capture two gold medals at the 1984 Olympics in Los Angeles.

Today the couple, who married in 1996, are involved in several international charities, including Special Olympics. They travel the world delivering inspirational speeches about their charities, gymnastics, and health and fitness.

Emmy Award-winning actress Patricia Heaton has created memorable, lovable and relatable characters on TV for the past 25 years. She is perhaps best known for her role on the critically acclaimed series “Everybody Loves Raymond” for nine seasons. She followed that up with another nine season run, starring in “The Middle.”

In addition to her acting and producing credits, Heaton is a bestselling author. Her most recent turn in the title role in “Carol’s Second Act” helped inspire the best-selling book, “Your Second Act.” Through her own experience gained as she pursued her new passions after her children left the nest, Heaton became curious about other people’s stories of second-act transitions.

A committed philanthropist, Heaton is the founding member of World Vision’s Celebrity Ambassador Network. She has travelled to Rwanda, Zambia and Syria with the humanitarian organization, which focuses on conducting relief, development and advocacy activities in its work with children, families, and their communities in nearly 100 countries.

Theodore Ginn Sr. is the founder and executive director of Cleveland Municipal’s Ginn Academy, established in fall 2007. The academy, which has an average graduation rate of 95%, is the first, all-male, public high school in the city of Cleveland and state of Ohio. The Ginn Academy, now in its 14th year, is guided by scholarship, leadership and service.

Ginn also is the head football coach and boys’ track coach for Glenville High School and has produced NFL players such as Cardale Jones, Frank Clark, Donte Whitner and his own son, Ted Ginn Jr.

A firm believer in helping students and adults reach their full potential in life, Ginn uses athletics to help students attain these goals. He will tell anyone that his program is neither about track nor football. “It’s about saving lives and saving souls,” he says. “Football and track are just the vehicles we use to ride in.” He strives daily to make a difference in the lives of young people and to cultivate leaders and citizens who reach back and give back to their community.

Doors open at 6:30 p.m. Registration is $85; contact your treasurer to register or add on the event when completing the online conference registration. Please indicate any special accommodations needed.

As a professional soccer goalkeeper for the Charlotte Independence of the USL, Brandon Miller has won multiple awards and a championship at the professional level.

On top of his athletic and entrepreneurial achievements, Miller also works with a number of nonprofit organizations and recently founded the Black Players Alliance of the USL. His main mission with all of his philanthropic work is to make an impact on underserved communities and empower those whose voices aren’t always heard.

Doors open at noon. Registration is $60; contact your treasurer to register or add on the event when completing the online conference registration. Please indicate any special accommodations needed.

A long-time educator, Mahoney has dedicated his life to bettering educational opportunities for all students, serving as a superintendent, principal and teacher as well as an adjunct professor at several Ohio universities. In 2001, he joined Battelle for Kids as the organization’s first executive director and was named executive director emeritus in 2016.

Under his leadership, Battelle for Kids grew into a national not-for-profit organization that partners with school districts, state departments of education, businesses and philanthropic organizations across the globe to advance educational equity and opportunity for all students. This work has impacted more than 6 million students and more than 400,000 educators nationwide.

© 2021 Ohio School Boards Association. All rights reserved.
OSBA leads the way to educational excellence by serving Ohio’s public school board members and the diverse districts they represent through superior service, unwavering advocacy and creative solutions.
Back to Top