Instead of studying for his college finals, Alex Banayan went to audition for “The Price is Right.” It turned out to be the best decision he ever made.

The college freshman sold the sailboat he won on the show and invested in his real fascination — the key to success. He set out to uncover how the world’s most successful people launched their careers.

Banayan, one of Forbes’ 30 Under 30 and Business Insider’s Most Powerful People Under 30, spent years nagging celebrities and business moguls for interviews. Ultimately, he sat down with Bill Gates, Lady Gaga, Maya Angelou, Steven Spielberg, Mark Zuckerberg, Warren Buffett and many others.

Banayan’s book, “The Third Door: The Wild Quest to Uncover How the World’s Most Successful People Launched Their Careers,” chronicles his unbelievable journey tracking down the world’s most successful people and uncovering how their careers began.

Their secret? They all took the third door.

Academy Award-winning actress and advocate for women and girls

Geena Davis has achieved remarkable success actress and a tireless advocate for women and girls.

Davis, who received an Oscar for best supporting actress for her role in “The Accidental Tourist,” is the founder and chair of the Geena Davis Institute on Gender in Media. The nonprofit, research-based organization works with the entertainment industry to reduce gender stereotyping and increase female roles in media made for children.

In 2014, the institute released the first-ever global gender and media film study, Gender Bias Without Borders. It found only about 23% of the evaluated films had a woman as a lead or co-lead.

Davis may be best known for her performance in “Thelma & Louise,” alongside Susan Sarandon. She also co-founded and chairs the Bentonville Film Festival, which champions women and diverse voices. 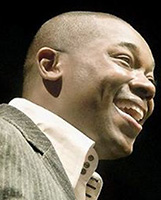 Cedric Jennings grew up in one of Washington, D.C.’s, most dangerous neighborhoods, where the dropout rate was well into double digits. However, he was an honor student at Frank W. Ballou Senior High School.

Jennings, who heads a social service agency in the nation’s capital, overcame the challenges of inner-city life and went on to earn several Ivy League degrees.

His personal story of struggle and triumph is recounted in Pulitzer-Prize winning author Ron Suskind’s best-selling book, “A Hope in the Unseen: An American Odyssey From the Inner City to the Ivy League.” The book follows Jennings from high school, through his demanding first year at Brown University and to his ensuing success.

After completing his graduate studies at Harvard Graduate School of Education and the University of Michigan, Jennings returned to Washington, D.C., and dedicated his life to helping others. In January 2011, Mayor Vincent C. Gray appointed him to serve as director of the District of Columbia Youth Advisory Council.

Ohio State University (OSU) and NFL star Eddie George ended a legendary football career with a Heisman Trophy, numerous NFL Rookie of the Year awards and many pro football records. He’s only the second NFL running back to rush for 10,000 yards while never missing a start, joining the Cleveland Browns’ Jim Brown.

But, George didn’t want his legacy to end there. After earning a Master of Business Administration from the Kellogg School of Management at Northwestern University, he remains focused on businesses that help improve the quality of life for all Americans. His vision of “healthy people and healthy places” is brought to life through George Enterprises, whose companies include EGX Lifestyle and EDGE, a planning and design firm that helps create healthy communities.

George also has discovered another talent — acting. In 2016, he made his Broadway debut in “Chicago” as the charming lawyer Billy Flynn. He also has appeared in movies and TV shows, including CBS’ “NCIS: Los Angeles” and HBO’s “Ballers.”

© 2018 Ohio School Boards Association. All rights reserved.
OSBA leads the way to educational excellence by serving Ohio’s public school board members and the diverse districts they represent through superior service, unwavering advocacy and creative solutions.
Back to Top